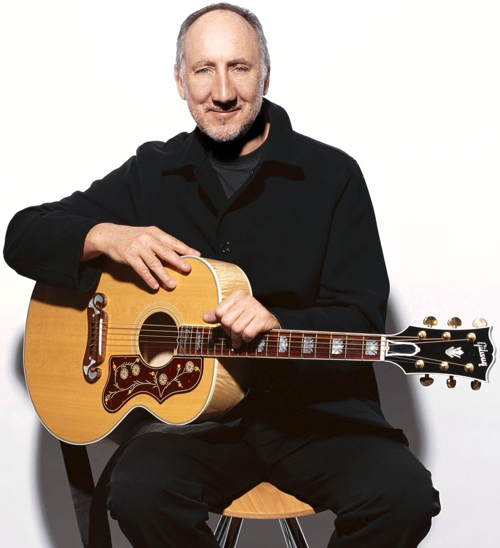 The Who’s legendary guitarist, Pete Townshend, gave the world such rock anthems as “My Generation,” “Baba O’Reilly and “Won’t get Fooled Again.” He’s also known for his wild windmill guitar riffs and turning axes and amps into piles of mangled metal. Now, rock’s eccentric statesman is back on the road in support of The Who’s first studio album in more than 24 years.

You’re currently on The Who’s Endless Wire Tour. How’s life on the road?
Good. Easy. Luxurious. Lucrative. But I’m too old to give a fuck and never really gave a fuck in any case about whether life on the road was good or bad. It’s just something I sometimes do. I’d rather be sailing in the South of France.

Your shows have been selling out like crazy. How does it feel to know The Who hasn’t lost the golden touch?
It feels strange. When punk happened in 1975 I thought I might get to retire. I thought the same thing when grunge happened in 1991. It seems like each time, the young ones either lost drive or their lives. Roger and I are lucky to be able to go out and make a recognizable Who noise.

What do you miss the most when you’re on the road?
I miss my son and my dogs, of course. But I miss my home cinema. I don’t have screen curtains that open or leather chairs or popcorn. I don’t even have the best sound system under the sun. But having a good projection system, a big screen,  and surround sound, has turned me into a movie buff after years of resistance.

If you were to create an all-star fantasy band, who would it consist of?
Mariah Carey and me—she could sing me to the final heart attack.

Where does the inspiration for your songwriting come from?
I have become kind of a History Man of rock, so I suppose much of my inspiration has to do with the past tearing at the present.

Will we get any guitar/amp smashing on this tour?
You can buy a $10 charity raffle ticket to win the last guitar I ever smashed [from The Who’s 2004 show in Yokohama, Japan] on my Web site. it now belongs to my supremely gorgeous partner, Rachel Fuller, who has already been offered $1 million for it.

Which Who song really gets your juices flowing?
“Relay.” Rabbit, our keyboard guy, really flies on this song. It takes him just a moment to hit the heights it takes most players an hour to hit. I just pretend to be Steve Cropper and riff away in the background. It’s fucking solid.

What’s your favorite song on The Who’s current album?
“Endless Wire.” I sing it and it makes me feel like Willie Nelson—old but cool. My favorite that Roger sings is “A Man in a Purple Dress.”

What’s the difference between this tour and your very first tour?
I suppose our first proper tour was in the UK supporting Gerry and the Pacemakers. The difference is that we now headline. Gerry runs a pub.