Baseball season is upon us, and what better way to celebrate the nation’s favorite pastime than hitting the road in search of America’s most beloved ballparks? From the friendly confines of legendary Wrigley Field to the freshly built Washington Nationals Park, these 10 stadiums will make you forget about Congressional hearings and juiced-up sluggers.
NEW YORK’S YANKEE STADIUM 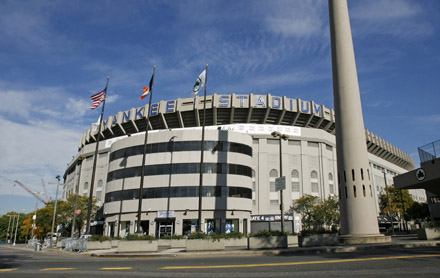 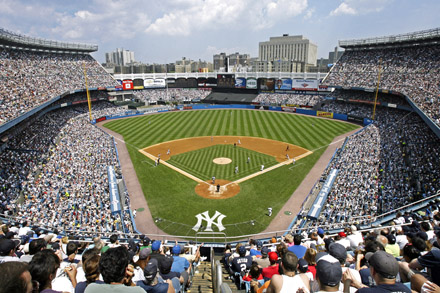 The 2008 season is going to be a big one for Yankee Stadium. Aside from hosting this year’s All-Star Game, ’08 will be the last hurrah for the “House that Ruth Built,” as the legendary ballpark will be bulldozed to make way for the Yankees’ new stadium—and that’s enough to make any diehard baseball fan shed a tear. Even though the stadium lacks the aesthetic character of other historic ballparks such as Wrigley and Fenway, you should take in this landmark before it’s gone.

Fast Fact: Yankee Stadium was constructed in only 284 working days, just in time for its inaugural game on April 18, 1923, against the Boston Red Sox. Babe Ruth hit the first home run in the new stadium to cap a 4-1 win over the Sox. 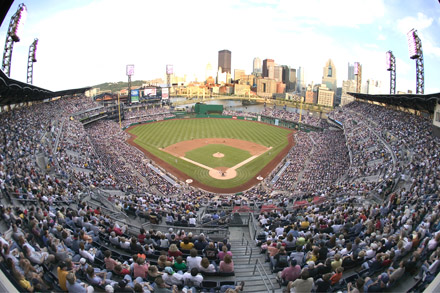 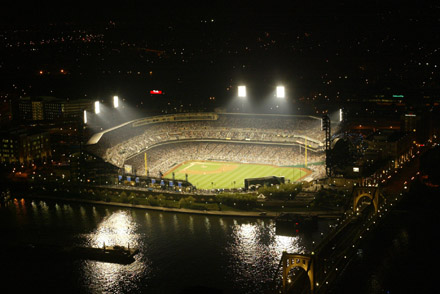 Photos courtesy of the Pittsburgh Pirates

Pittsburgh is built on pride, so it’s no wonder when planners set out to design the ‘Burgh’s first new baseball stadium since 1970 they created a venue that celebrates the Steel City’s heritage. PNC’s classic design is not only a salute to Pittsburgh’s baseball past, but it also overlooks the rivers that helped make the city a juggernaut during the industrial revolution. But with all this talk of history, don’t think that the fans weren’t the team’s top priority when they built this beautiful stadium. In fact, with the highest seat being a mere 88 feet from the field you’re assured a good view of the action no matter which section you’re in. Oh, and nothing completes the PNC experience like a famous Primanti Brothers sandwich, which consists of sizzling meats, melted cheese, French fries, tomatoes and coleslaw—all stuffed between a hearty bun.

Fast Fact: PNC’s outfield wall rises up to 21 feet behind right field in honor of Pirate legend Roberto Clemente who wore No. 21. 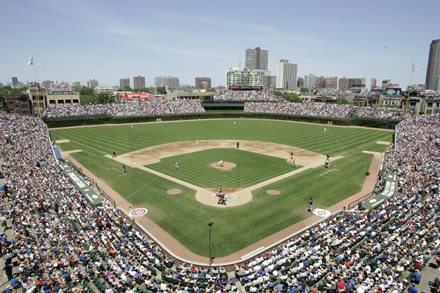 The second oldest active ballpark (behind Boston’s Fenway Park), Wrigley has been home to the Chicago Cubs since 1914. Sure, Cubs fans haven’t enjoyed the thrill of a World Series title since 1908, but that doesn’t mean they aren’t head over heels in love with their historic ballpark. In fact, spending a day in the friendly confines of Wrigley Field should be near the top of any baseball fan’s wish list. From the ivy-covered outfield walls to the manually operated scoreboard, Wrigley is what the modern retro-inspired stadiums modeled themselves after. We recommend purchasing a seat in the outfield bleachers for a truly unique experience (just don’t forget to throw back any home run balls hit by the visiting team).

Fast Fact: Wrigley Field’s first official night game took place on August 9, 1988, against the New York Mets. The Cubs defeated the Mets by a score of 6-4. 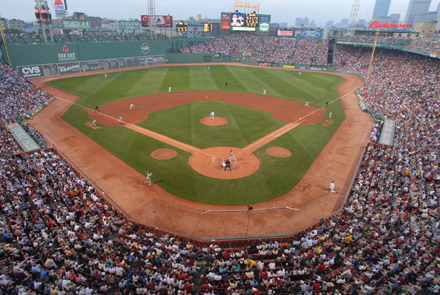 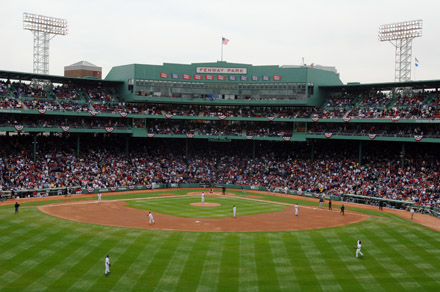 Holding the title as Major League Baseball’s oldest active ballpark, taking in a game at Fenway is a rite of passage for any baseball nut. From the legendary Green Monster to the Fisk Foul Pole, Fenway is overflowing with nostalgia. Don’t forget to take notice of the lone red seat in the right field bleachers, which represents the spot where Ted Williams’ mammoth home run landed during a June 9, 1946, game against the Detroit Tigers. The bomb was officially measured at 502 feet—the longest measurable home run ever hit inside Fenway Park.

Fast Fact: The Red Sox contemplated building a new Fenway Park in the late ’90s, but fans (and the city of Boston) rallied to shoot down the idea, thus preserving their beloved ballpark. 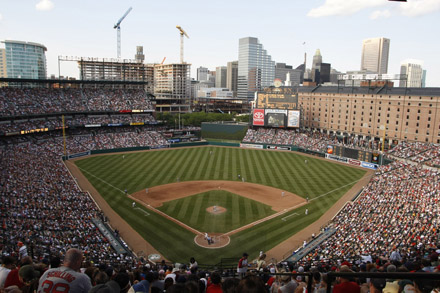 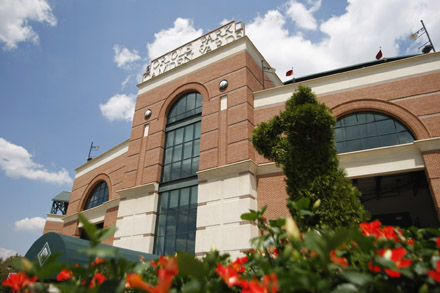 Baltimore’s Camden Yards set the bar for what a retro ballpark should be, paving the way for teams like Cleveland, Denver, and Pittsburgh to build modern throwbacks of their own. Camden Yards was designed in such a way that there’s rarely a bad seat in the house, so don’t feel that you have to spring for the high-priced seats to enjoy the game. Another fan-friendly aspect of Camden Yards is that visitors are allowed to bring their own snacks and beverages into the park (as long as you carry them in clear plastic containers). Baltimore’s famous Inner Harbor is located right outside of the stadium, so arrive early and check out all the great specialty shops and mouthwatering restaurants nearby. 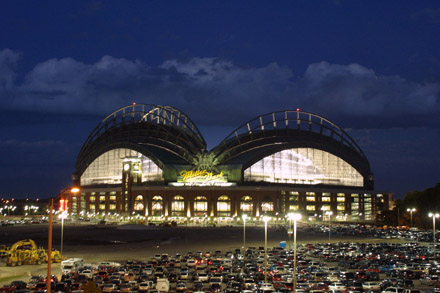 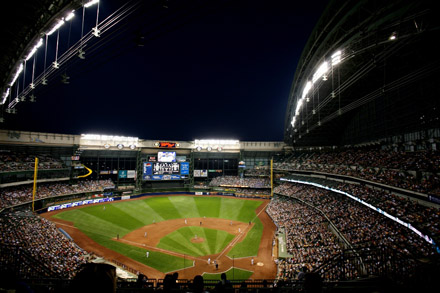 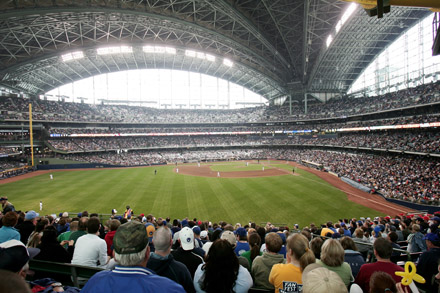 Perhaps the most beer-friendly stadium in America, Miller Park offers a variety of brews ranging from Miller Lite to the finest micros from Wisconsin’s New Glarus and Pioneer brewing companies. Of course, you can’t have a beer without a trademark Wisconsin brat, so bring your appetite because there’s no shortage of food in this park. Tailgating is also a Wisconsin tradition, so get to the game early and enjoy the pre-game festivities. And don’t forget to stick around after the game to watch them close the giant retractable roof—trust us, it’s much more interesting than it sounds.

Fast Fact: Apparently, no one can break in a new ballpark like first baseman Sean Casey. While with the Cincinnati Reds, Casey nabbed the first hit in Miller Park on April 6, 2001. Three days later he hit a home run to get the first hit in Pittsburgh’s PNC Park. 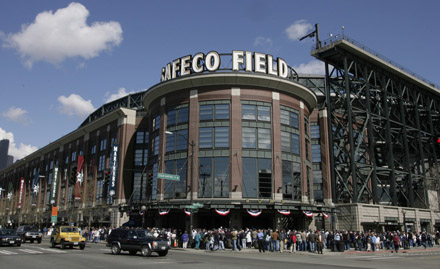 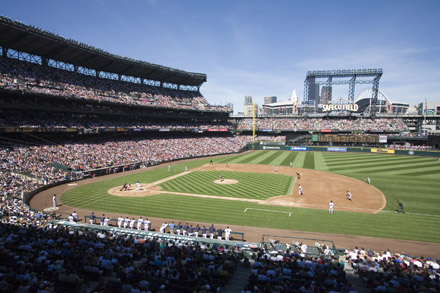 Photos courtesy of the Seattle Mariners

Anyone who has ever worn a Red Sox jersey to a Yankees game knows the home crowd doesn’t always roll out the welcome mat for fans of the opposing team. But that’s not the case at Seattle’s Safeco Field. In fact, with friendly staff members, great fans, and incredible views of city’s skyline, Safeco Field might be the most relaxing ballpark in the league. Food tends to be expensive at Safeco, especially if you are shelling out for the whole family. But then again, do you know of any ballparks where the food isn’t expensive? Plus, you can’t leave without trying the garlic fries—they’re spectacular. 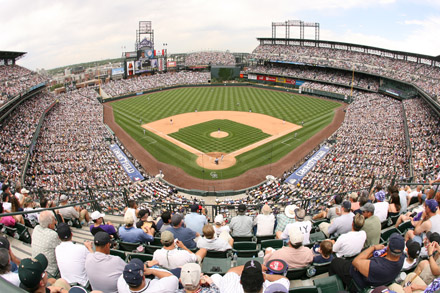 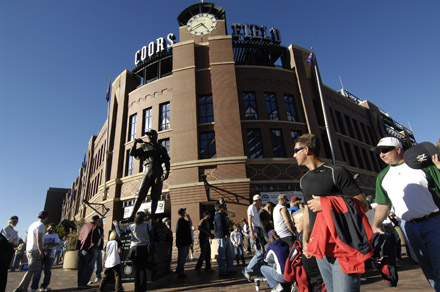 Much like Milwaukee’s Miller Field, Denver’s picturesque Coors Field can be considered “the House that Beer Built”—and trust us, there’s no shortage of brew flowing through this ballpark. Be sure to check out the baseball-inspired Sandlot Brewery for a nice selection of microbrews and a warm atmosphere. Of course, there’s much more to Coors Field than beer. You can see a game in the centerfield “Rockpile” for as little as $4 per ticket! And if you’re lucky enough to take in a late afternoon or early evening game you’ll get to enjoy watching the sun slowly set into the Rocky Mountains. Who says a baseball game can’t be romantic?

Fast Fact: Most of the stadium seats are green. However, the upper deck’s 20th row is painted purple, signifying exactly one mile above sea level. 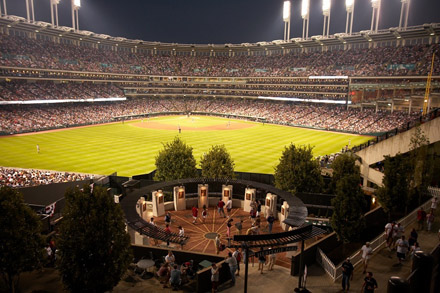 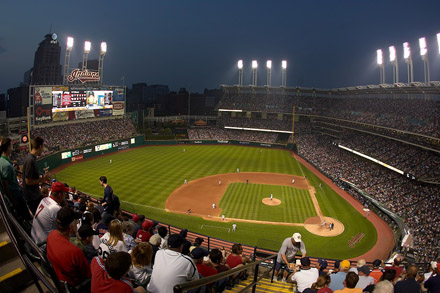 Affectionately known as “The Jake” since the park opened in 1994, Cleveland’s Jacobs Field gets a name change for 2008. Earlier this year, Progressive Insurance shelled out almost $60 million to have its name adorn the Indians’ beloved home. But no matter what you call it, this stadium offers the total fan experience, including great sight lines, a beautifully kept field, and some of the most loyal fans in the league. We recommend taking in one of the Indians’ rock-‘n’-roll-themed fireworks shows, which they host after every Friday night game. More importantly, have a hot dog slathered with Cleveland’s authentic Ballpark Mustard—it’s the best mustard you’ll ever taste.

Fast Fact: Almost half of the funding for Cleveland’s beautiful ballpark came through a 15-year tax on cigarettes. 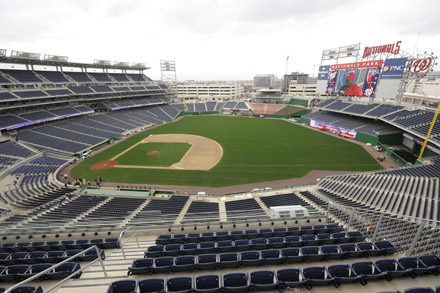 Situated in Southeast Washington, D.C., Nationals Park is Major League Baseball’s newest stadium. The start of the 2008 season marks the grand opening of this 41,222-seat state-of-the-art gem and the Nationals left no stone unturned when it came to building their new home. The park is packed with the modern amenities that have come to define the new generation of stadiums, such as luxury boxes, almost 50 concession stands, indoor dining, and great views of the field. But team owners didn’t stop there. Nationals Park also boasts cherry blossom lined walkways, the latest audio/video technology, 600 feet of LED lighting around the rim of the stadium, and the distinction of being the first major stadium to be certified as an eco-friendly facility.