You may remember him from the infamous pine-tar incident or his incredible career stats, including the most hits by any third baseman in major league history. Now the Kansas City legend opens up about baseball fantasy camps, pulling pranks and Barry Bonds surpassing the Babe. 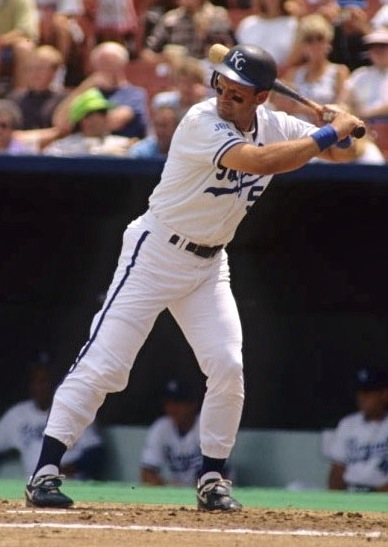 Nowadays you’re sharing your baseball knowledge with fans of the game. Tell us about your current project, the Baseball Hall of Fame Fantasy Camp.
It’s incredible. The Hall of Fame started the camp last year. They get Hall of Fame players to run the camp and give the guys pointers. It was so real doing it at legendary Doubleday Field [home to the Hall of Fame game every summer] in Cooperstown—it was like the movie Field of Dreams. For me, I love to go there and put on that uniform again with people from all over the country. These are people from all walks of life who admire baseball players, have dreamed of being Major League Baseball players but for some reason or another their dream never came true. But here they are in Cooperstown, in one of the greatest settings of all time, playing baseball and being managed by Hall of Fame baseball players. You don’t have to be a great player. All you have to do is love the game of baseball.

Speaking of love for the game, you always looked like you were having a great time on the field. Did that fun carry over to the clubhouse as well?
I’m not a real serious guy. When you’re married and you have kids, you have to be a little more serious, but I was single until I was 38 years old. Now I’m 53 and married, and I have three boys ages 10, 11 and 13. I have to be a little more responsible. But when I was a player, I always acted like a kid.

What were some of your more memorable pranks?
The prank I had the most fun doing was stealing a teammate’s credit card. When we would go out for dinner, everybody would put their credit card on the table. Whoever’s credit card the waitress took, that’s who paid for dinner.  One time, Keith Miller, who came over from the Mets, had some family in town from Michigan. We had a day game in Milwaukee, so we said to Keith, “We’re going to do our dinner deal tonight. Are you going to go?” He said, “Oh, I can’t I’ve got family in town.” We didn’t think it was fair that Keith was going to go out with his family and not us and not be eligible to buy dinner. So we took his credit card out of his wallet and used it to charge a $500 dinner. We slid the card and bill under his door that night and the next day he came in yelling at me, “You motherfucker! I’m going to kick your ass!”

And did he kick your ass?
[Laughs] No, but he got me back. I was never the one to check out of a hotel room. I would just leave and they would be stuck with my check, phone bills and room service. Keith told me for the next two years every time he ate in a hotel room, he would sign my name and room number.

A lot of people compare you to Mike Schmidt during your playing days. How’s your relationship with Mike today?
I always respected him as a player. I thought we were different types of players though. I was more of a table-setter, he was more of a busboy cleaning up the table. I was the guy who was suppose to get on base with a single or a double. He was the guy who would hit the big home run.  I was very honored when he came back in ’99 to the Hall of Fame to see me, Robin Yount and Nolan Ryan inducted. I love being around him—we have a wonderful relationship.

You were on the same team for your entire career. it’s hard to find that kind of loyalty today.
At the same time, though, the team had loyalty to me. It was a two-way street. They showed me a lot of loyalty early in my career by giving me a five-year contract, something they had never done. Three years went by and they gave me another five-year contract. Then another four years went by and they gave me another five-year contract with two one-year options. The next thing I knew, my career was over. Everybody always asks me why I signed those five-year contracts when if I wanted to play out two more years I could have been a free agent and could have made more  money. But, to me, playing in October was more fun than playing any other month.  October was when I would go to bed at night and I’d be scared. I woke up scared, then I’d be on the bus going to the ballpark and getting really scared. That’s fun.

Did you continue to have those feelings later in your career?
I was scared to death before every game I played.

Your stats are incredible. You came so close to batting .400.
I missed it by five frickin’ hits. The first thing my dad said to me after the season was over was, “You mean to tell me you couldn’t have gotten five more fuckin’ hits?”

Some people might not realize how hard it is to bat .400. Can you give a little insight into what it was like during those last few games?
In 1980, I didn’t get off to the greatest start in the world, and I pulled ligaments in my ankle and missed about five weeks of the season. Then I came back and I was on fire the rest of the season. I was still over .400 with two weeks left to go in the season. I was enjoying the moment and having my fun but all of a sudden it’s like, “Oh shit, I gotta do this.” Unfortunately, my average fell to .384. I hit .500 the last five games in the season and got it back up to .390 but that’s where it ended. It’s probably the biggest disappointment of my career. 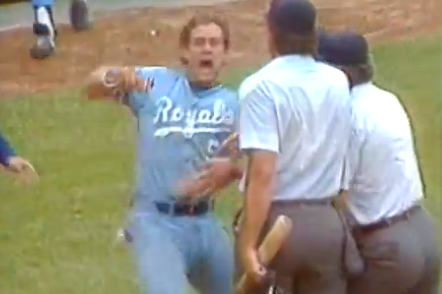 Tell us about the infamous pine-tar incident.
I was just going out to voice my opinion. I didn’t even know what was going on, to be honest with you. When I saw it on TV afterward, I said, “What the hell was I thinking?” Tim McClelland was the umpire. Timmy is about 6-foot-6 and weighs 250 pounds with chin guards and chest protector on and a mask, and I’m going out there to kick his ass? I’ve been at numerous dinners with Timmy and he always asks, “What were you going to do to me?” I’m 6-foot-6 and 250 pounds. You want to fight me?  Come on, let’s fight right now!

Your passion for the game was always apparent.
I don’t like to lose. I hate to lose in anything! I’m the youngest of four boys and I always lost to my brothers. It just got me to the point where I was tired of fucking losing!

Major League Baseball didn’t plan any big celebrations for Barry Bonds when he surpassed Babe Ruth on the list of all-time home run leaders.  Do you think it was an obvious statement on how baseball views Bonds?
He hasn’t done anything yet. He passed Babe Ruth. if he passes Hank Aaron, then I think something will happen. Second place is no big deal. We have to see what happens when, or if, Barry passes Hank Aaron. But, for me, second place is nothing.

Have steroids ruined baseball?
Players in the game today are better than they were 20 years ago. At the same time, they don’t play the game the same way. You don’t see as many hit-and-runs, sacrifice bunts or stolen bases. You don’t see players trying to manufacture runs that often.  The players are so much bigger and stronger that everybody relies on home runs. When I played, we had one exercise bike in the locker room and that was for the guy who knotted a hamstring or a calf muscle. Nowadays, they have workout rooms and weight rooms, strength and conditioning coaches, and these guys are pumping iron. When we went to spring training, it was to get in shape. These guys go into spring training to get in better shape. They lift weights at 10 at night. When I played, at 10 p.m. you had a cold beer in one hand and a sack of Fritos in the other!

You’ve been called a millennium player because your style of game is compatible with every era of baseball.
I’ll never forget the day I got my 3,000th hit back in 1992. I had four hits and four at-bats, so I come up to my fifth at-bat and I hit a ground ball to the second baseman. he bobbled it for just a second and I beat it out! I beat it out! I just don’t see the desire and the hustle that I saw back in the ’70s and ’80s. I don’t see guys giving it their all when they know they’re going to be out. I don’t see guys stretching singles into doubles or doubles into triples like I saw back in the ’70s and ’80s. Most of the time I knew when I was going to be out, but goddamn it, I was at least going to see how close I could get.

Do you believe Pete Rose belongs in the Hall of Fame?
If he bet on baseball then I don’t think he does. I’m not 100 percent sure if he did or not though. But the evidence they have against him is pretty overwhelming. Baseball has always been very forgiving. Look at all of these players who have had different kinds of problems with all kinds of things in the past and have been suspended by Major League Baseball, even been thrown in jail, and then they come back to the game. If Pete said, “I did do some things wrong,” I guarantee everybody would have forgotten about it five years down the line and he would be in right now. Every time you walk into a locker room, there’s a sign written in English, Spanish and probably now in Japanese, and it tells you about that one rule about betting on baseball: You’ll Be suspended for Life.